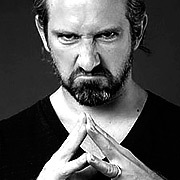 Seth Thompson has over fourteen years of professional experience in the video game industry as a cinematic artist and expertise in environment and set design, modeling, surfacing, lighting, and layout. Seth grew up practicing traditional art on a farm in Virginia with big dreams of one day working on video games at Blizzard Entertainment or Square-Enix. He has had the luck to see both of these dreams come true, working for over eleven years on the Cinematic Team at Blizzard Entertainment and for three years on Square-Enix’s Visual Works Team in Tokyo, Japan. Seth is currently Blizzard Entertainment’s cinematic Environment Modeling Supervisor in Irvine, and has created and supervised assets for various game Cinematics including Warcraft III, World of Warcraft, StarCraft II, Diablo III, Final Fantasy XII and Final Fantasy VII: Advent Children.