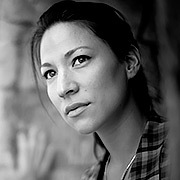 Born in Duesseldorf, Germany, In-Ah studied animation in high school and then went on to earn a two-year higher diploma in 2D character animation from the Lycée Technique des Arts et Métiers in Luxembourg. In-Ah completed a 3D animation degree from GOBELINS, which led to a postgraduate year at the Filmakademie Baden-Wuerttemberg. During her career in VFX and animation, she has worked on features for Framestore (Harry Potter and Goblet of Fire, The Tale of Despereaux and Where the Wild Things Are), Double Negative (Iron Man 2 and Paul), freelance commercial work, a year at Guerilla Games in Amsterdam (Killzone 2) and Sony Pictures Imageworks in Vancouver (senior animator on The Smurfs, Hotel Transylvania and Cloudy with a Chance of Meatballs 2; and supervising animator on Oz the Great and Powerful). After finishing work on The Amazing Spider-Man 2, she joined MPC to work onGuardians of the Galaxy.